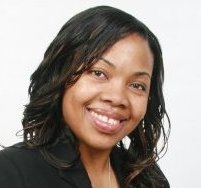 Born in Montego Bay, Jamaica, Janet Lewis migrated to the USA in 1991. She joined the acclaimed Direct Messengers Band as a background vocalist and was privileged to be a part of their second CD entitled, My Jesus is Coming. She stayed with the group for a number of years while she developed her own unique style of ministry. This innate passion for music soon had her doing background vocals for major Caribbean Gospel Artists such as Joseph Niles, Marlon ‘Bro. Paul’ Anderson and Hopeton Lewis, to name a few.

If asked what is the engine that propels her relatively young ministry, she responds: “… grace , mercy and God’s divine favor”. She also credits Bro. Paul for being the one to see an unused gift within her when she did not recognize it herself. As the single parent of two teens, Tiffany and Jonathan, Janet has maintained that throughout her life experiences so far, the love of God has been the only constant source of strength that she has known. That thought has given strength to her favorite scripture verse found in Jeremiah 3 vs 8… Be not afraid of their faces, for I am with thee to deliver thee saith the Lord…. This verse she has reworked in her Jamaican vernacular to mean simply….”Nuh Watch No Face”.

To date, Janet has shared the stage with such powerful and anointed ministers as Claudell Clarke, The Grace Thrillers, Junior Tucker, Papa San, Bridget Blucher, Hopeton Lewis, Bro. Paul (Marlon Anderson), and Sis Shirley Ceaser. Throughout the years from 2005 to the present Janet has received various accolades including Best New Voice from Gil &Pat Bailey and Female Artist of the Year from the Caribbean Gospel Awards, Song of the Year from the Atlanta Caribbean Gospel Music Awards Show (ACGMAA).

Janet now has six (6) CD's to her credit, namely Give Him All, He Will Never Leave You, Till The Night Turns To Day, Don’t Let Go, In My Weakness and her latest release Instrument of Praise.

Janet has a passion for young people and stresses that each one of us, not unlike a young person, is still a work in progress as we all have yet to gain perfection. She hopes that her experience and her ministry will be the instrument God uses to lead a lost soul to new found joy in Him. Her greatest wish is to be an example to what you can be when you give God your all.